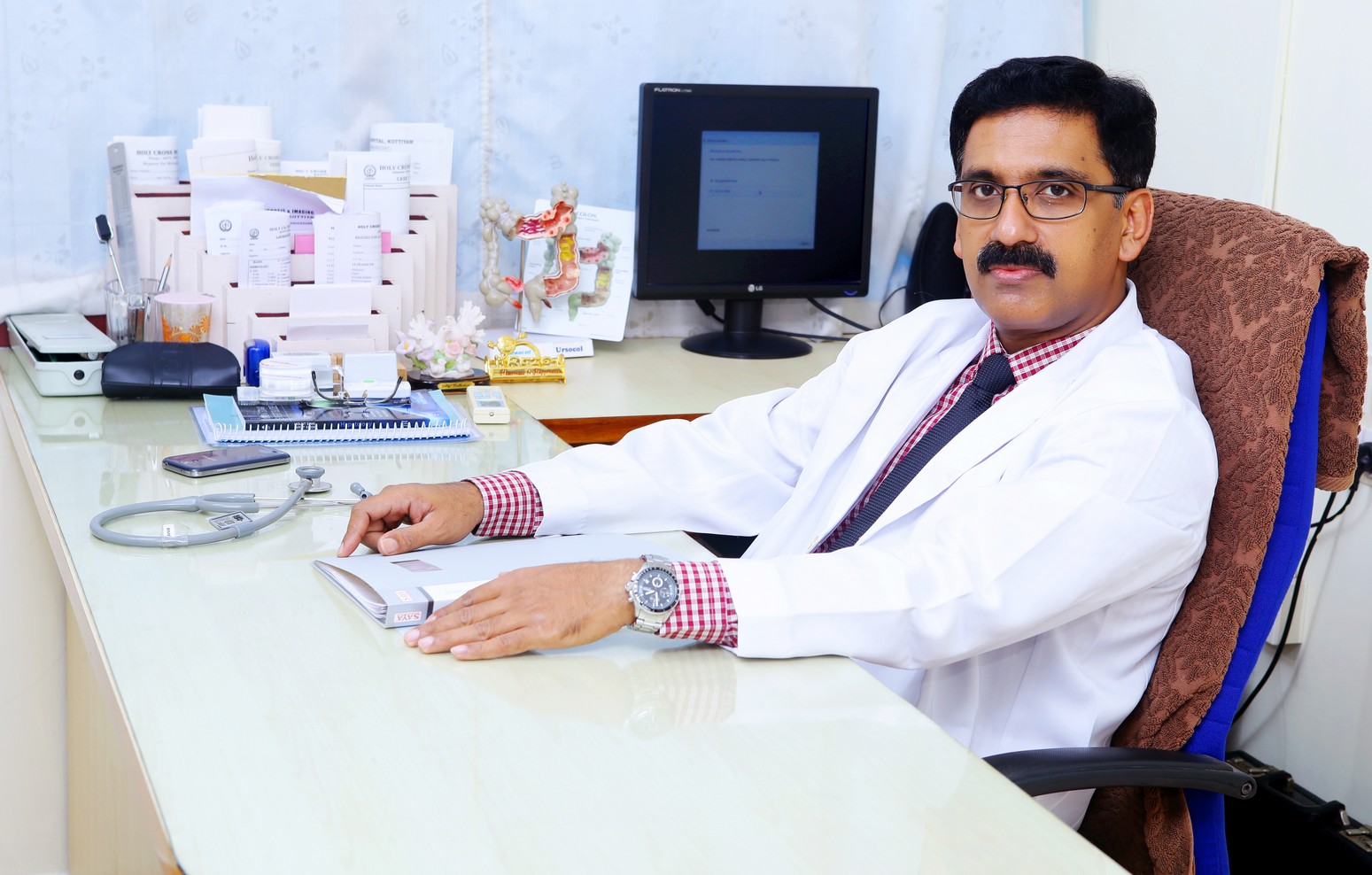 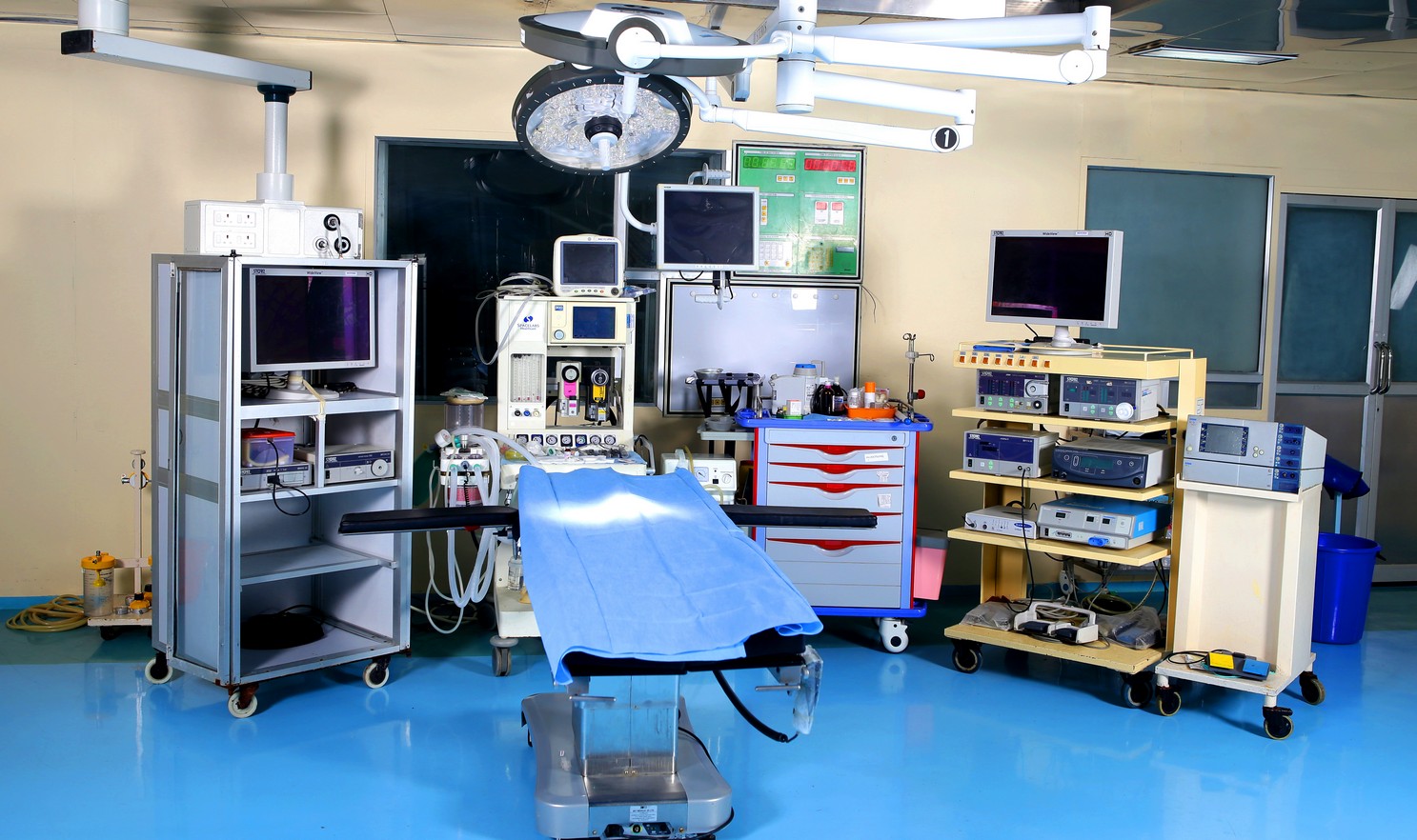 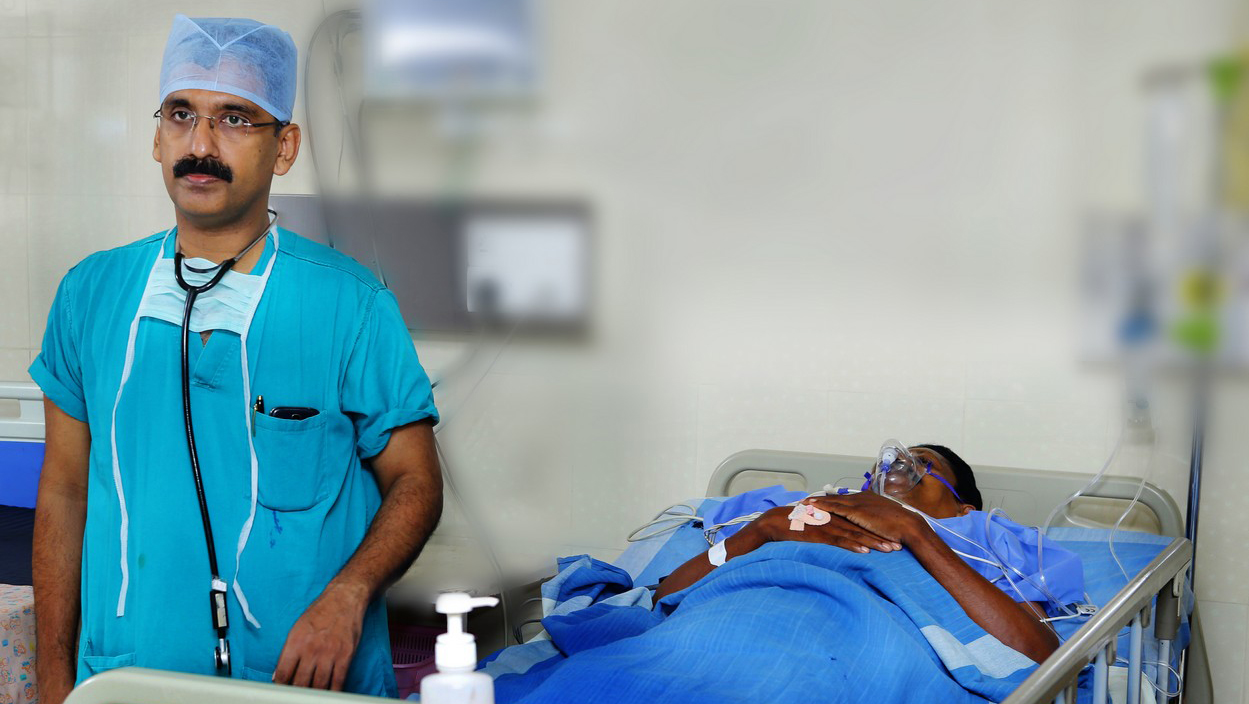 This website depicts a 360 view of his academic background, professional skills, interesting clinical photographs of patients he treated and surgical procedure videos.

Some Personal information about Him.

Senior Laparoscopic G I Surgeon since 2002.

A professionally acclaimed and one of the most sought after Senior GI and Laparoscopic surgeons in and around Kollam, he currently works as Chief Consultant & Head of the Department of Surgical Gastroenterology, Bariatric and Minimal Access Surgery at Holy Cross Superspeciality Hospital, Kottiyam, Kollam.

A product of 1986 MBBS batch of Govt. Medical College, Trivandrum, in which he studied under University Merit Scholarship being the Pre-degree 1st Rank holder from University of Kerala. Soon after that he obtained his Masters in Surgery (1993-96) from Govt. Medical College, Calicut. Having a passion for joining the Medical Education services, he started his professional career as a Senior Lecturer in General Surgery in Calicut Medical College where he served for 3 ½ years. During this period he was part of more than 15 research paper submissions. He became a Diplomat of National Board, New Delhi in 1997. With a limited observer ship at Glasgow, he cleared the FRCS part II exams and became Fellow of the Royal College of Physicians & Surgeons of Glasgow, UK in 1999. Soon he developed and irresistible interest in Gastrointestinal Surgery, for which he quit the Medical College and joined the Department of GI Surgery at Amrita Institute of Medical Sciences, Cochin where he served only for a short period of 5 months. Through merit he secured a seat for super specialisation in Surgical Gastroenterology at Govt. Medical College, Trivandrum and obtained the coveted M.Ch (Gastro) degree in 2002. He had special interest in topics like Chronic Calcific Pancreatitis and Colorectal Cancer and did several presentations in National and International Conferences on these subjects. He was awarded the National Best Paper award of the Indian Association of Surgical Gastroenterology at the National Conference at Bhubaneshwar in 2001. Though ranked first in the PSC examination for staff selection to Surgical Gastroenterology department in Kerala Medical Education Services, he gave up that job and opted to serve in private sector as a fully qualified GI Surgeon.

In April 2002, he joined Bishop Benziger Hospital, Kollam and was instrumental in developing a well known Surgical Gastroenterology Department there. The limited skills in Laparoscopic Surgery that he started acquiring from Medical College, Trivandrum was fine tuned with more rigorous and advanced training from different centres with animal lab and Hands-on Laparoscopic training programmes at Coimbatore, Delhi and Mumbai. In July 2008, he underwent Advanced Laparoscopic training in Digestive Surgery at Minimally Invasive Surgical Center, National University hospital, Singapore. With growing experience in Minimally Invasive Surgery he soon became recognized as a competent Laparoscopic GI Surgeon. He stated his Bariatric Surgical work following a Fellowship training programme with hands on experience from Bangalore in 2010. After 12 years of service at Benziger Hospital, he moved over to Holy Cross Hospital, Kottiyam, Kollam in January 2013 where he is continuing his current surgical work till date.

At Holy Cross Hospital, he is presently supported by a very professionally competent and experienced team of Surgeons, Gastrophysicians, Anaethesiologists, Oncologist, Radiologist, Pathologist, specially trained paramedics, etc. Together, this surgical team has the experience of performing a wide range of advanced laparoscopic and complex open surgical procedures in the unit.

During his 14-year career as a GI Surgeon, he has performed more than 10000 abdominal operations which includes several complex Esophageal, Gastric, Bariatric, Colorectal and Hepatobiliary and Pancreatic operations both open and Laparoscopic. He has to his credit a large series of successful Key hole surgeries for specific problems like Achalasia cardia, Gastro-esophageal Reflux disease, Sleeve Gastrectomy for weight reduction, Complex ventral & Groin Herinas, Pancreatic Resections, Splenectomy, Hemicolectomy, Total Proctocolectomy, Ultra low anterior resections, etc. All these procedures are judiciously chosen to be done laparoscopically with optimum patient safety and comfort, for less post-oprerative pain, faster recovery and earlier return to work. Major and intricate surgical resections for Cancers of Esophagus, Stomach, Large intestine, Rectum, Liver, Gall bladder and pancreas are routinely undertaken in the unit followed by adjuvant treatment to be administered by the Oncologist.
Being a well recognized speaker on various subjects in Surgical Gastroenterology, he has been invited as faculty to deliver guest lectures in more than 65 regional, state level and national CME programmes and conferences. 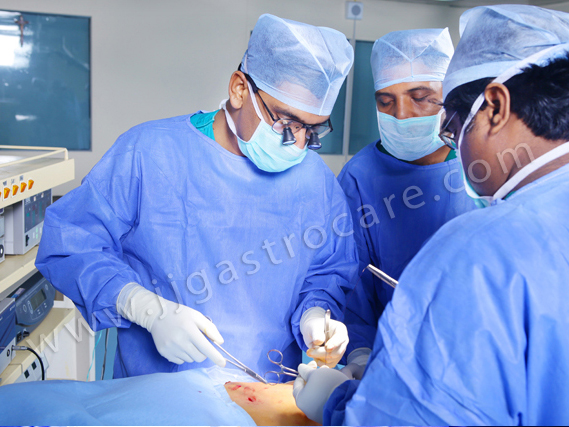 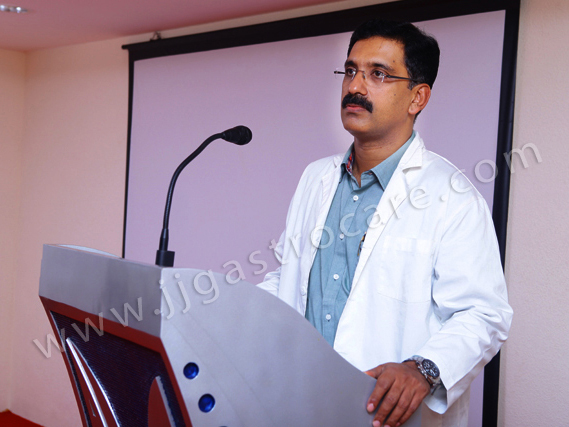 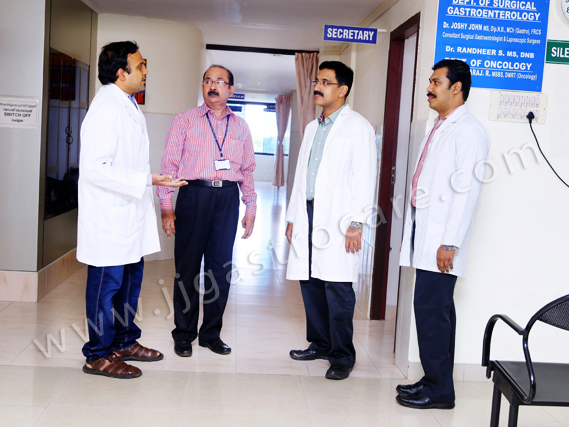 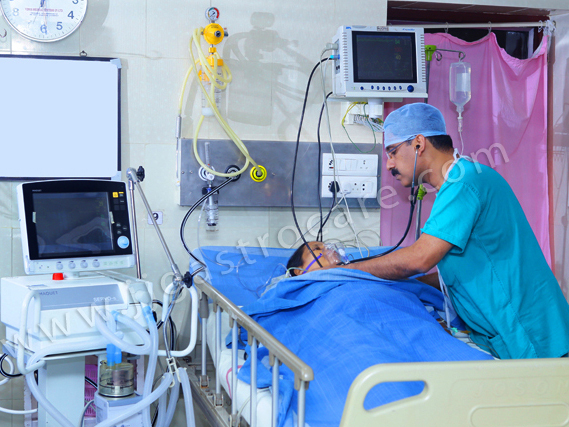 He is available for consultation on OP days at Holy Cross Hospital, Kollam and at his evening private clinic. During consultations due importance is given in listening patiently to the problems and their concerns, as part of
more..

Making the right clinical Diagnosis is undoubtedly the cornerstone in appropriate patient management irrespective of the case or place where he is treated; and trying to reach the correct diagnosis with minimum, but the most relevant
more..

Treatment is the endpoint for which any patient approaches a doctor and the ever-expanding technological advances in today’s medical world throws up a plethora of options by which each problem can be handled. We consider that it is the
more..

Contrary to the popular notion about most surgeons, he is one GI Surgeon who ardently sticks to the principle of ‘Primum non nocere’ (primarily do no harm). Hence if surgery has been advised to his patient, it will be only after all other less invasive or non-operative
more..

Holy Cross Hospital, Kottiyam, Kollam with a glorious tradition of more than 56 years since its inception, occupies a distinctive position among the super-speciality hospitals in Kerala and is recognized by all as one of the institutions which has made tremendous contributions in the private health care sector in the state. It has earned a niche for itself as a paragon of health care for its noble and selfless service. It stands unique among the private hospitals in South Kerala with it vast and self sufficient campus, spacious layout of the hospital, dedicated nursing care, clean and serene hospital environment and committed team of doctors.

We have two ultra-modern operation theatres dedicated entirely for the department, equipped with a wide range of sophisticated operative gadgets like Harmonic scalpel, Ligasure, ERBE vessel sealing system, Argon Plasma Coagulator, Enseal, Radio-Frequency Ablation, Intra-operative Ultrasound scanning, etc.
The operative expertise of the surgical team clubbed with the judicious use of the state-of-the art equipment offers patients operated in our department least invasive but most precise surgical treatment even for the most complex of GI surgical problems.

Special Services Offered at the Department

First try all other means, but if the wound Heal not, then use the knife, lest to the clean

Feel free to contact me if you have something to say!

Patients requiring Emergency care can attend the Hospital causality round the clock on all days. They will be seen by the duty doctor and then inform the consultant on call. 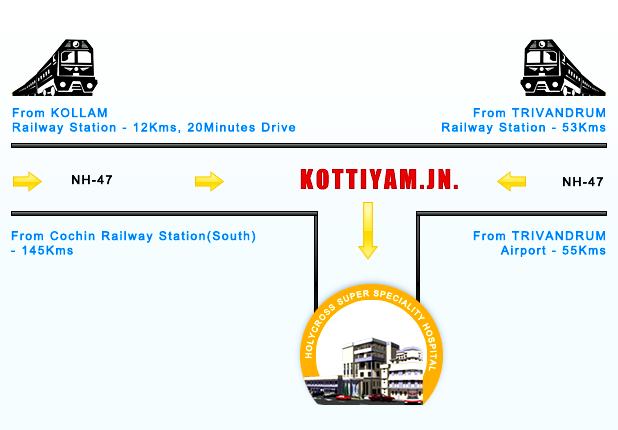 J.J Gastrocare is a Personal clinic of Dr. Joshy John functioning only in the evenings time 5 – 7pm on alternate days (Tuesdays, Thursdays & Saturdays only).

Facilities for Patient consultation, examination, Rectal examination, Piles banding and Diagnostic UGI Endoscopy are available at the clinic by prior appointment.

Being located on the first floor of AGC building and with no hospital attached, emergency cases and sick patients cannot be entertained and so should not approach the clinic.

Prior appointments for Patient consultation and Upper GI Endoscopy can be made by phone.

Contact: 9947284085 (11am – 5pm)
Online Consultation in : www.qkdoc.com
(You can book an online doctor consultation here) For urgent queries only

May contact, Residence: 0474 2766423
(please do not call for appointments)
E-mail: joshytjohn@hotmail.com